the one page book – prospects & pessimism 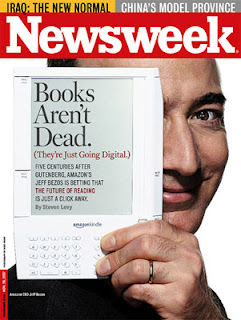 (This is not intended to be a product review)

In November last, Amazon launched Kindle - the mobile reading device.
So what is the big deal? Yet another gadget in town, right?
Well, though I have not had a chance to lay my hands on one yet, but I suppose it is much more than that.
Kindle is almost like carrying a one page book that has many pages (and is many books!). By the time you are done with one page you can turn it into another page. Of course it is heavier than one page but is much lighter than many paperbacks! And there is a lot more to it than just that.
Here is a modest list:

• It downloads entire books in minutes, wirelessly
• You do not need a PC - desktop or otherwise
• The display is not backlit and that makes it easier on eyes and closer to the way a page looks in the ‘old world’ books. It is not too heavy – lighter than many so you can take it anywhere out of home and any place inside from bedroom to the thunder box. As one of the reviewers would put it “Even on the porcelain throne..!”
• It has a great battery life – 3 days I am told
• US Bestsellers can be bought for under $ 10 (so you actually benefit a lot from fewer trees being cut!)
• You can hold over 200 books at any given point in time and add more with external SD card
• Not just books, you can select from over 80,000 books, magazines, newspapers and Blogs to download and read

That’s a lot of good news!
One could now carry along, almost all the books - wherever one liked -especially when one did not want to stuff the travel bag. No wonder, Economist compared it with the iPod.
After all music is for entertainment and so are many of the books! Thus when we enjoy carrying all of our music wherever we go, why would we not want to do the same with our books? Logically there might not be any reason not to compare iPod and Kindle, or is there?

Think about it. I would come back to the iPod vs. Kindle comparison in sometime.

In the mean while let us ask our self “What is Kindle replacing?”
Or as many would like to put it “Who is the enemy?”

Is it replacing old world books paperbacks and otherwise?
I am not very sure of that.
A better way to put it could perhaps be that Kindle is first trying to replace the books in-flight, at the arrival and departure lounge in airports, the bus and train terminals and carriages. In other words, Kindle would first like to reach out to the people who travel (a lot).
If the above hypothesis is correct, then the enemy that Kindle is facing (at least in the launch stage) is the old-world books.
Kindle stands to gain on the old-world books through the decisive edge that it has in terms of its size and weight. It is smaller and lighter and yet ‘loaded’ much more than any of the old world books. Remember 200 books anytime anywhere all the time, at once!

But how many of these active travelers, are also active readers?
A still smaller subgroup I suspect. Does this qualify as a market that is big enough?

I suppose that’s another point of mull over, as we move on.

At this stage it might also be relevant to understand what is the ‘concept’ of a book, in the minds of this first set of prospective buyers that we are talking of?
By ‘concept’ I mean, do they look at books completely rationally for want of a better expression as, ‘objects that impart knowledge’, and thus ‘consume them accordingly’ viz. read, take notes and move on!
Or do they harbour a deeper ‘bond’ with their books. A bond, that goes beyond gaining knowledge and moving on.

• This bond is based on the joy of acquiring books, building a collection and showing it off.
• It is linked with the emotions that are triggered when someone says, “Wow! Have you read all of them..?”
• It is about flagging the book, taking notes, marking the book, writing the date it was bought, or the date one began reading it and then going back to It again
• Lending (and borrowing) books
• Engaging in the proverbial ‘smell of the new book’
And many more like these.

For now we could call these the rituals & culture around book reading.
Needless to mention that this is not an exhaustive list of rituals around reading and owning books and any prospective buyer would not engage in all the rituals mentioned above. That not withstanding, it is relevant to understand the frame of reference that Kindle would be compared against, in the minds and hearts of these prospects.

While kindle is well placed to handle the challenge from the old world books at least on the rational front, there also seems to be a battle that it might have to fight (and win!) on the emotional front. And for now the product does not seem to have anything built into it to cater to these emotional needs.

This emotional gap could well be bridged with a stunning design, something that Kindle finds itself a little weak on.

I am not here to critique the launch of Kindle. Frankly, I just love new products, especially in personal technology space.
I am just curious to know what might be going through the minds of the product planning team at Amazon. And what could be the primary motivations of the first wave of Kindle buyers. Would the purchase be driven by the ‘logic of smarter reading - on the go’?
Or
‘the magic of having almost all the books anywhere any time, all the time’?

I would like to believe that the smart business that Amazon is, it might have already figured out most of these challenges, and would be already geared to help Kindle sail through these.

However the real challenge for Kindle is not to get the first set of adopters for Kindle. In fact it would be a bigger challenge to expand the franchise beyond the ‘reading- traveler’.

Well, if I were to now go back to Economist’s comparison between iPod and Kindle, I would say that it was easier for Apple to mount the second wave of consumers after, selling enough numbers to early adopters (and this is not just in hind sight, please). This relative ease was to do with the fact that iPod was, and continues to be, an extremely ‘sexy looking’ product.
iPod perhaps sold just as many numbers as a fashion/fad as the numbers that it sells because it is a fundamentally smart/intelligent product that helps the user carry all the music that they ever wanted to - anywhere, anytime, always, forever (did they really want something like this?)! In fact many of the buyers, who were driven by the product’s ‘cool quotient’, discovered the sound quality and the ease of use etc, etc only after they began using it.

This fact comes very close to the marketing mandate that iPod had set for itself back in 2001 – extend ‘iPod's’ relevance to more ‘music’ lovers and tell the world that this wasn't just a intelligent/smart tech-gadget available to few, but was the icon that stood for a new experience with ‘music’.
In the statement above, if you replace the words ‘iPod’ & ‘music’ with ‘Kindle’ & ‘books’– it could well come really close to what Amazon might need to do.

In case of Amazon Kindle – the jury did not have to go out to conclude that it is not exactly what can be called ‘cool or sexy looking’ product. Consequently word of mouth becomes that much difficult to come by even if the product scores high on functionality.

Does this mean that Kindle would into oblivion after the initial enthusiasm runs out?
• Is it a product ahead of its time? Would it rather have waited for at least one whole generation of readers to come up, who were born reading off a monitor instead of printed paper?
• Would it not be able to handle the user habit viz. ‘I like to collect my books’ the way iPod helped many music lovers get over their hobby of collecting ‘physical’ music (CDs)?
• Would Kindle not be able to help people get over physicality of books, in that sense?

Though it is difficult to answer these questions, one thing is certain -the chances of Kindle’s survival and subsequent bloom are a function of it’s ‘design superiority times its functionality’.

For now Kindle seems to be drawing a blank on the design superiority parameter.
I would now revisit the two aspects of Kindle that we discussed earlier – viz.
• Is it right to compare it with iPod?
• Is traveler- reader a big enough market segment to start with?

Yes we can compare the two but actually there is no comparison mainly from the point of view of the way Kindle looks as a book reader in comparison with iPod as a mobile music player.
While answering the second question I would also give out what I believe is the weakness and thus opportunity for Kindle. And here is how I would put it:
Imagine a Kindle with rounded edges (or something even better)!

Imagine a Kindle in a colour of your choice!
Imagine a signature series Kindle, personally signed by an author you admire (for me it would be Ray Kurzweil)!
Imagine a Kindle that does not look like the present kindle!
Imagine a Kindle without buttons and with just one big touch sensitive screen that mimics everything that a book does including the way we turn the page from right to left!

And now think if the writer-traveler is big enough market.

These might not be the best ideas to make Kindle look sexier but the point I am trying to make is that design innovation can help handle many of the technology adoption challenges. A simple design breakthrough can expand the user group manifold.
As long as the product is a real development, charm and disarm through innovative design is only going to add fuel to the fire of sales volumes.

Another thing that went in iPod’s favour, was its visibility despite its ‘pocketability’. The earplugs were ubiquitous. They were like the ambassador’s of its unspoken buzz. I wonder if Kindle can have a visual manifest like that. It would go a long way in making it buzz-worthy.

Today Kindle seems to score on ‘function’ without what can be called great ‘form’. No matter how unfair it may sound but ‘what a product does’ is at best only as important as ‘the way it looks and feels’.

I want Kindle to look better. Not because I do not like the way it looks but because people do not find is sexy enough. But that does not take away from the fact that Kindle is a truly a disruptive product, and personally I would like to see it grow.