Is Netbook becoming a Notebook? - Part 2

IDC forecasts that by the end of 2009 almost 20 million Netbooks would have been sold. This represents almost 12% of the entire Notebook market. To me this already is a sizable chunk of the mobile computing market.
Now step back and imagine what if Netbooks had entered the mobile computing space before the Notebooks did. Would we still prefer the Notebook to the Netbook? Think.

To me the real potential of the Netbook is as big as the Notebook market is today and the bottom end of the PC market. This is the real number of people who need Netbooks. The question is how can we reach Netbooks to them faster?
Somehow companies seem to be in two minds about promoting their Netbooks. Perhaps because the more they promote these, the more competition they create for their own pricier and more loaded Notebooks.

But isn’t this cannibalization inevitable? After all sooner or later majority of consumers are going to realize that a Netbook can address their needs.

This situation somehow reminds me of the Film Roll Camera Vs. the Digital Camera conundrum 8-10 years back. Only thing that makes Netbooks poised for a still faster adoption is their lower price. (Digital cameras were very pricey at the time of their launch.)

If we think about the needs of the three potential user groups that we talked about earlier – it will become evident that there is enough room to market different kinds of Netbooks between these three groups. The frequent traveler is looking for a professional Netbook, the young girls is looking for a cute Netbook and the students just want their first digital workbook in the shape of a Netbook.

There is a huge market for these light & smart devices and we as marketers and manufacturers need to allow this market its rightful place be it the airport lounge for a frequent traveler, a studio apartment of a young girl, or a classroom anywhere in the world.

Is Netbook becoming a Notebook? - Part 1

(and Notebook is becoming a Desktop?)
Recently my Mandarin teacher introduced me to her newly acquired Lenovo ideapad – a Netboook. It is a small, sexy, simple and solidly built thing. Interestingly enough, my teacher already has a Notebook but she found it too heavy to lug around and thus the Netbook.
Did she compromise a lot for this portability? Not really – except for the fact that the screen is just about 12” & there is no DVD drive – there is virtually no perceptible difference in the performance. Even the smaller keyboard was not limiting in any perceptible way. Given that my teacher is not a graphic designer or a hardcore gamer, it is no surprise that Netbook is just what works for her.
I asked her about how often she used the Notebook, now that she had an alternative and as it turns out, her Notebook has now become her home PC.

To me, this kind of user is not an exception. In fact I would go on to say that majority of laptop users today, actually use their Notebooks to do similar things. Most of the time they are checking/sending emails, doing IM chats, creating and saving MS Office files, surfing the Internet, playing some flash games or saving an interesting video downloaded from some website or received in a mail from a friend. Come to think of it, there is not much other than this. 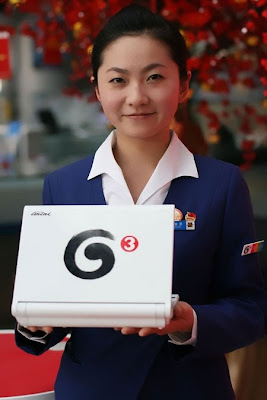 This usage behaviour is not new – what is relatively new is having the option of buying something like a Netbook. But there was and, in many situations still is, a perceptual block towards Netbooks viz. the fear of buying a slow performing computer that jeopardized everyday work, the doubt that the keyboard is too small to allow ease of usage etc. Increased adoption will potentially change all this perception. The more people see what a Netbook is capable of, the less they will doubt.

In this adoption cycle - the most potential group of users and most likely the potential blocks that could prevent them from choosing the Netbook could be perhaps be summarized thus:

1. Group 1: ‘Netbook is the new Notebook!’
Frequently traveling ‘non-organization man or woman’ who works for him (he might have a laptop and/or desktop as his home of SOHO computer)

2. Group 2: ‘Netbook is the way a computer should be’
A large group of young female users, who prefer ‘cute-portability’ to ‘pricier specs’. They choose the clear benefit of simplicity over the hard to understand definition of performance

Potential Block: “But I have not seen any of my friends using it. My boyfriend never suggested me I buy that. Is it a good choice”?

And now the largest and the most under-utilized user group
3. Group 3: ‘Netbook is a Workbook’
Students comprise the largest group who should be using Netbooks. Visualize the Netbook case as the new school bag.
Student applications are perhaps best suited for the adoption of Netbooks. No wonder this is the group that inspired the creation of Netbook first.

Potential Block: “My school tells me I can only buy XYZ brand of Notebook, I can get this at a special price” 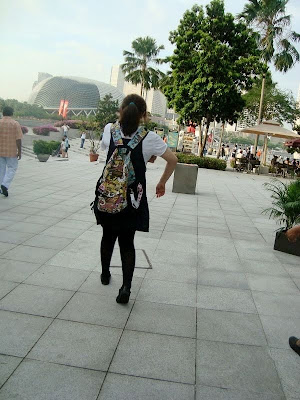 Together these three segments can be really big. In fact the third segment by itself is a huge under utilized opportunity.

Unusual is ok as long as it is an Offer

While in Chengdu for the recent National Day holidays I thought of checking out the departmental near my hotel. I had not walked for more than two minutes inside the electronics section of the store, when I reached an island display announcing a Bag of Rice or a Bottle of Cooking oil as a free gift with every purchase worth more than RMB 500. This was in the middle of names like Nikon, JVC, Panasonic, Philips, Sony, Apple etc.
A very pragmatic promotional offer I should say. Despite the fact that the department store was not necessarily a value destination – the promotions were very down to earth 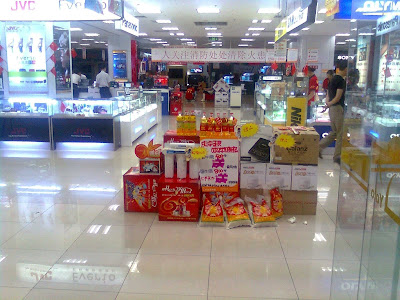 This unique offer reminded me of something that I witnessed almost six months back while I was in a similar departmental store in a smaller town close to Kaifeng in Northern China. There I was greeted by something even more unusual – I saw a colorful starburst announcing Tide Detergent Powder being given out free with second hand DVD Players. 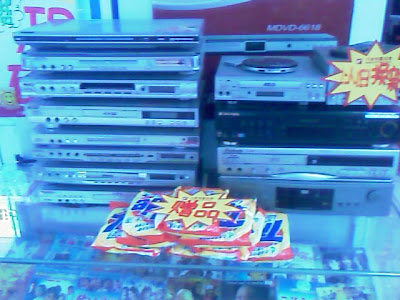 This also makes me think about looking at promotional offers through a wider lens. Instead of getting stuck in the more conventional- brand or category related paradigms, we can actually open ourselves to ideas that are pragmatic or simply unusual.