'Swarmonomics' and the Chinese shopper – seven things to learn 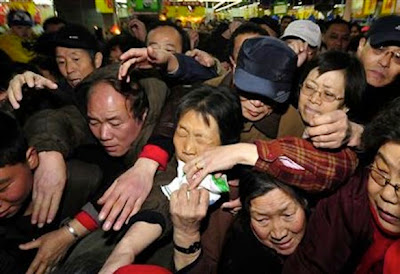 In the past four weeks we have seen two examples of swarm-style purchase frenzies by Chinese shoppers.

The first occasion was the panic-buying of common salt. Shoppers were under the impression that the iodine in salt could help in protecting them from the negative effects of nuclear radiation coming out of Japan following the earthquake-related nuclear emergency.

Stocking up on salt was also viewed as a good idea because some shoppers were convinced that the sea salt due to hit shelves in the coming months would have been polluted by the nuclear radiation, making it wiser to buy up stocks now. On a single day, around 4,000 tonnes of salt was sold in Zhejiang alone! Shops ran out of stocks, and when all the salt was gone, many zeroed in on soy sauce, due to its high salt content.
Calm had barely returned when another round of swarm-style purchasing hit the stores. This time it was laundry detergent.

Shoppers from Shanghai, Beijing, Hangzhou and Wenzhou, upon hearing that detergent prices were to go up soon, moved in hordes and wiped the store shelves clean. Shop shelves lay empty as wave after wave of anxious shoppers loaded their shopping carts with almost any pack of detergent that they could lay their hands on.

These two instances say a great deal about the attitudes of the average Chinese shopper. These attitudes include:

1. Uncertainty about the future: The average Chinese shopper is anxious about tomorrow. They are not sure what is going to come their way and want to do all that they can to pre-empt anything that might go wrong. Making oneself uncomfortable today only to avert negative effects of future uncertainty, no matter of how remote or far-fetched it might be, is not unusual

2. Low levels of trust: Chinese shoppers do not trust reactive information. Irrespective of the assurances from various other professional agencies about the price, quality and future availability of the products, shoppers were not convinced. They went on stocking up on these products as much as they could.

3. Risk aversion: Chinese shoppers are hugely risk-averse, especially in times of relative uncertainty. They do not like to

leave things to a stroke of luck; they want to ensure that they do the right thing for themselves and ensure that it covers any kind of potential risk.

4. Value consciousness: The large majority of Chinese shoppers will go to any extent to save money. 'Money saved is money earned' seems to be the shopping mantra for the masses that flock to supermarkets. This value consciousness is not just unique to China, but a theme reflected in other emerging markets. Shoppers in India are not very different. The sight of Chinese shoppers jostling for salt and detergent is reminiscent of the shopper stampede in India in 2006 when the Big Bazaar (a leading retail store brand in India) announced a three-day-long annual sale that offered a heavy discount on products across categories such as apparel, electronics and other consumables. Millions of shoppers came to buy, and in some of the cities police had to be called to manage the anxious mob of shoppers. Shoppers were worried that they might not be able to get the deal if they reached the store late or missed the first day of sale.

5. 'Swarm sense': The occurrence of a flash flood of shoppers is neither sense nor nonsense; instead it is swarm-sense.

This is propelled by a feeling that 'the crowd must be right'. There is complete lack of individual judgment in the purchase decisions, and this only becomes more pronounced in the event of insufficient proactive information from credible sources.

This swarm-sense is also similar to the way Indian masses reacted to the news of Ganesha (a Hindu deity) drinking milk in 1995 and again in 2006. Millions streamed into Hindu temples carrying their pot of milk to offer to the deity.

6. Connectedness: Rumours behind both the events were triggered largely by misinformation that spread through mobile phone messages and online microblogs. The speed at which the messages were spread and the scale of response demonstrates how modern-day communication technology has turbo-charged age-old word of mouth. This also shows the higher credibility of communication channels like mobile phones in such rumour-laden situations.

7. Post-fact society: At a time when we have access to multiple information sources and diverse perspectives, we do not get the truth; we only choose to believe one version of it. What might 10-15 years ago have been a journalist's dilemma about which version of a story to believe and write about, is now the dilemma of the average person. The only difference is that the average recipient of information might not always be conscious of the choices that he or she is making.

What can all this tell us as marketers and advertisers? We can definitely do well by acknowledging the importance of speed and timeliness of response. Such situations can be seen as moments of crisis and yet they can prove to be big opportunities for brands to come across as earnest and committed to a shopper's interest. For example, in the above two situations, consumer product brands could have gained a great deal had they stepped in early and reached out to shoppers; in the case

of the detergent frenzy they could have told shoppers about the company's commitment to provide the products at constant prices.

These two incidents also show the importance of opinion leaders in shaping people's behaviour. If brands identify the opinion leaders, especially those with clout in the online space, and supply them with complete information, they would be able to counter misinformation much faster and more effectively.

While shoppers are risk-averse when they lack credible information, marketers, in spite of having greater access to information, are not much different. They need to overcome this barrier. On this occasion marketers lost the opportunity to have a socially responsive stance, but there is nothing stopping them from doing that in the future.